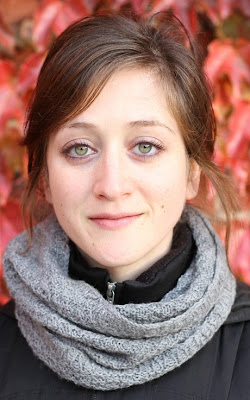 Check out Amaranth's collaboration with Brad Bouse, Between Page and Screen, here.


A.) What's the first poem you remember writing?

I know it wasn't my first, but I remember writing a narrative poem in 5th or 6th grade about a lonely girl looking for someone to play with. I illustrated it with drawings of the people, animals, and objects she encounters over the course of the afternoon (at one point she tries to befriend a seagull, but rather than their biological differences getting in the way of their friendship, it's the seagull's sleepiness that prevents true connection). I vividly remember writing her father's excuse when she asks him to play a game: "I'm all hungover and there's an ache in my head. / I think I'll go upstairs to bed,' which I accompanied with an image of a Homer Simpson-esque balding man with five o'clock shadow and a dingy white t-shirt rubbing his eyes. I was extremely proud of how well I drew the hands. I don't remember the teacher's response to my poem, but she did love the drawings and thought I might grow up to be a children's book illustrator. I felt torn about that because while I was proud of the drawings, I didn't realize I was writing a children's story. I thought it was a poem with artwork. I'm sure the whole thing rhymed and had a moral about relying on one's inner resources, but it really didn't occur to me to class it with Dr. Seuss or Shel Silverstein. I went home disappointed.


B.) What are three songs you've listened to on repeat lately?


I don't really carry music around with me all day, since I have difficulty writing or reading with music playing and I like to catch up on poetry during my commute. My primary listening time is when I am in the car running errands. I often use that time to catch up on my podcasts (Bookworm and the Ubuweb podcast, and sometimes Entitled Opinions, hosted by Robert Harrison at Stanford, among others), but lately I've been listening to a 3-cd set of songs written and performed by Paul Braffort, one of the founding members of OuLiPo. I had the opportunity to meet him this past summer because I translated his book Mes Hypertropes together with the brilliant writer and musician Gabriela Jauregui. He is one of the kindest, most witty and politically engaged poets I have had the opportunity to meet, and is knowledgeable on a broad range of topics from artificial intelligence to Chris Ware's comics. That polymathic appetite for information comes across in his songs, which reference a range of musical styles and subjects. One cd consists entirely of compositions of Raymond Queneau's poems. Another has original songs by Braffort. And the third contains settings of poems by a range of great OuLiPo writers, including Duchamp, Fournel, Roubaud, and others. Braffort has a great voice. You can hear his 1958 album "Paul Braffort chante des atomes et des hommes" on his website, http://www.paulbraffort.net/autres_chansons/disques/disques.html, as well as selections from more recent work and covers by a number of French artists.


D.) Do you carry poetry around with you throughout the day? Whose books are you carrying?


I commute to work on the T and use that time for reading poetry. I am always carrying at least one book of poems or a journal I subscribe to. This past week I read Andy Fitch's chapbook Island (The Song Cave, 2011). I found myself getting totally immersed in the voice of those poems, which provides a moment to moment description traversing New York City, including both beautiful fragmentary vignettes and descriptions of the physical sensation of walking all day long. We are simultaneously inside the speaker's body and outside in the world, which of course is what writing fundamentally can do -- merge the internal and external worlds -- but there is something wonderfully unique about that voice that I just got swept up by: it is simultaneously in control and out of control, always noticing things that are not as the speaker expects them to be. He tries to check his mic in a store window and it turns out to be a door. He spots a friend in the street and calls to him, but can't get his attention. He follows a path through the park he's apparently taken before, but finds it has been blocked off and he can't get through. Over the course of the day our Virgil keeps undercutting his own authority as guide. Even as we are carried along by his voice (a voice I continued to hear over the course of my day narrating my own walks around Cambridge and MIT campus, "Over there's the building they call...is it...the Pei toilet?"), we become increasingly aware that Island is an Empire state of mind, an inner monologue about the outer world that reveals the flaneur's ultimate pleasure: being simultaneously alone with his thoughts and part of the bustling crowd. But this walker is not above the masses, as those moments of fallibility remind us. He's another island within a sea of islands. This is exactly why I found the book so captivating to read on the train where, with one's nose in a book one feels a state of isolation within society, of anonymity coupled with profound awareness of one's physical presence. This and the fact that it is beautifully written.

E.) Your contribution to Issue A is a cross-generational interview between two amazing musicians, and you are also fairly active as a poet and a scholar. How do these areas overlap in your creative life and where is the balance?


The balance is always shifting, but I feel my creative and scholarly impulses are closely intertwined. As a Mellon Postdoctoral Fellow at MIT I am both studying and working on digital poetry and the theoretical reading I do informs my creative work. The digital pop-up book I completed with Brad Bouse grew out of my interest in textual materiality as analyzed by both book artists and new media scholars and was influenced by reading essays and books by Johanna Drucker and N. Katherine Hayles. At this moment of the coexistence of screen and page-based reading, I wanted to think through the two, and poetry felt like a logical outlet to do so in a medium-specific way. I wrote the poems, a series of letters between two lovers, P and S, accompanied by animations that reference the concrete poetry tradition, to explore their etymological and conceptual similarities and differences. Our goal in using augmented reality was to make the book work on a few levels: foremost as a playful experience for the reader holding the book who sees the text fly off the page, but also as a punny, sonically rich series of poems that reward close reading and as a meta-textual encounter at the juncture of print and the digital: the poems are only available in that between place where page and screen meet--the reader must have both the book object and a computer with web access to read them.

My most recent manuscript of poems also is heavily inflected by research into the historical and cross-cultural significance of salt, a mineral scattered throughout the book. I tend to read a lot before I know what I want to write, and I sometimes think my writing and translating practices are just other ways of reading and engaging deeply with other texts. My reading and thinking about poetry has always inflected my work. That's one of the reasons the Ph.D. in Literature and Creative Writing at USC was so fruitful for me. It gave me time for both sides of what I do. While I was writing my dissertation on modernist poets' relationship to their writing technologies and constructions of authorship I was also thinking about what it means to be a writer in the digital age and allowing my own work to be shaped by a collaborative writing process with the wonderful poet and performance artist Kate Durbin. In working together on Excess Exhibit, which includes a flip-book of drawings by Zach Kleyn, Kate and I wanted to expand our notions of authorship by dropping individual control over the poems. We wrote initially using constraints and visual art as seed texts to explore the themes of physical and linguistic adornment, but we allowed the project to mutate over time into a series of conjoined poems in which we can no longer tell from line to line who contributed which words. The resulting poems blur (we hope) the line between text and image, self and non-self in their rapturous exploration of excess. Collaboration provided us with a way of escaping the self for a hybrid persona. She gets away with things we probably wouldn't otherwise let ourselves do, just as those modernist technologies I studied for my dissertation licensed their users to reconfigure what it meant to be a poet in a time of war and trauma when bodily wholeness couldn't be taken for granted.

In their interview, Ruthann and Hélène talk about songwriting as a kind of home for them both when they are away from home. I guess materiality is that home for me since it is the focus of both my scholarly and creative work, both of which are attentive to the surface effects of words (their sound and appearance) and the materials though which they are written and presented (whether in digital media or through some print technology). I suppose that is where the balance is.
Posted by Brooklyn at 6:43 PM